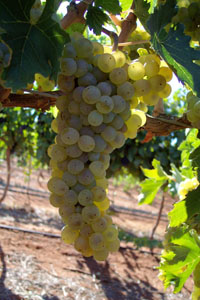 I remember well my first encounter with Nosiola.  I was at one of those huge walk-around tastings at a local wine shop and was tasting through an importer's selection of Italian wines.  Some guy I didn't know was doing the flight concurrently with me and when the pourer gave us a splash of Nosiola, a grape neither of us had ever heard of at the time, we gave it a tentative sniff and sip and kind of looked at one another out of the corners of our eyes.  It smelled a little nutty and really didn't taste like much of anything.  We both had the same thought: is this what it's supposed to taste like or is this flawed?  After we politely queried the pourer about the soundness of the bottle, she poured herself a taste and told us that the bottle had just come off the ship the day before so it may be in a little shock, but for the most part, yes, this is really what this wine is like.  My temporary companion and I shrugged and walked away.  There weren't any bottles available for purchase at the tasting, and since the shop was pretty far from my home base, I didn't put in an order for any.  The wine didn't really captivate me and I was content to walk away and put off the chance to write about it for another time.  It was six months before I spotted any more Nosiola.  Remembering my prior experience, I wasn't exactly thrilled with the find, but I was determined to give Nosiola a chance to win me over so I bought two bottles and tasted them on back to back nights.

Nosiola is a tough grape to write about.  Oz Clarke calls it "unusually neutral," and that's a pretty good summation.  There's very little information about it available, I'd guess, because it's a pretty forgettable grape.  It's not the kind of thing you taste and get really excited about and rush out to tell the world.  It seems to be native to Trentino and was first described in detail in 1825 by an Italian naturalist named Giusseppe Acerbi.  The name derives from the Italian word for hazelnut, which is nocciola, and is so called because the wine can have some hazelnut characteristics in the nose (much of the info I have is from this site and while they say something about the color of the berries or stems or something, I can't quite parse what it is that they're getting at).  The grape does well in hilly regions, which is good because the Dolomiti in the region name in the title of this post references the Dolomite mountain range in northern Italy.  It buds early and so is susceptible to frost and is thin skinned and thus susceptible to grey rot (the bad Botrytis) and powdery mildew.

Nosiola is perhaps best known as the base of the Trentino version of Vin Santo (not to be confused with the similarly named but somewhat different Vin Santos of Greece).  In Tuscany, most Vin Santo is blended from Trebbiano, Malvasia and a handful of other white grapes while in the Marche, the blend must be mostly from a grape called Passerina (which will be the subject of an upcoming post here).  In Trentino, Vin Santo must be made from 100% Nosiola grapes that are dried on small mats, crushed and fermented and stored in very small wooden vessels for at least three years (though typically for longer).  Wines made in this style are eligible to be bottled under the Trentino DOC appellation which, as far as I can tell, is one of only two DOCs in Italy that allow Nosiola to make up the majority or totality of the blend (the other is Sorni Bianco).  Most varietal Nosiolas that you are likely to come across will be IGT bottlings and all of the ones that I've seen are bottled under the Vignetti Delle Dolomiti IGT which stretches across both Trentino and the Veneto. 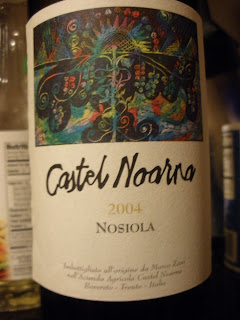 The first bottle that I was able to find was the 2004 Castel Noarna which I picked up for around $19.  I was curious to taste this wine to see if perhaps Nosiola would pick up some more interesting flavors from a little bottle age.  In the glass, this wine was a medium gold color, definitely showing its age a bit.  It had a distinctly nutty aroma like fresh hazelnuts or almonds and not much else.  On the palate it was medium bodied with a surprising vein of acidity.  There was a light lemony flavor along with slivered almonds and a clean minerality.  As it warmed up, it seemed to pick up a kind of buttery flavor but on the whole, it was pretty neutral.  I was surprised at how well it had held up since this isn't a grape that is typically known for its acidity and aging potential.  My suspicion is that there just isn't that much that can fade from Nosiola in the first place, so aging it really isn't much of a risky endeavor.  It reminded me a little of a Fino Sherry (though not nearly as overwhelmingly nutty) and the same kinds of pairings that work with that wine would probably work well here also.  I'm thinking aperitif or salted nuts or something in that vein. 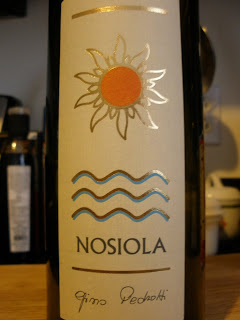 The second wine that I tried was the 2008 Gino Pedrotti Nosiola which I picked up from my friends at Curtis Liquors for around $18.  If the label looks a little familiar it's because I've written about this producer's Schiava here before.  In the glass, the wine had a medium lemon color with aromas of green apple and lemon peel.  The nose was somewhat elusive as it was markedly present on a first whiff, but I found myself acclimating to it very quickly.  You kind of have to sniff it and then walk away for a minute and come back to it to really get at it.  On the palate the wine was medium bodied with medium acidity.  It had light minerally lemon and a kind of candied green apple flavor.  The nutty aromas and flavors that were the hallmark of the prior wine were largely absent here though the general sense of neutrality was not.  There was more primary fruit here (relatively speaking) so perhaps the nuttiness comes out a bit more with some time in the bottle.  This wine would be an adequate companion to a lot of foods, but I wouldn't expect that it would really heighten or intensify very many dishes.  Neutral wines do occasionally have their place at the table so if you're in the market for that kind of wine, Nosiola may be your new best friend.  At those price points, though, it's probably not a wine I'll be spending a lot of time with in the future.
Posted by Unknown at 2:27 PM