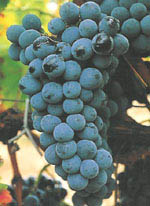 Mencía appears to be a grape on the rise.  Over the past few months, I've noticed quite a few of the wine shops whose email lists I'm on start to offer more and more wines made with Mencía from northwest Spain. I've also started to notice that most shops that I visit these days have at least one wine made from Mencía and some shops have three or four different bottles to choose from.  The main reason, I'd guess, is the price.  These wines are generally very good values and tend to really over-perform for what you'll find yourself paying for them.  It hasn't taken over the world just yet, though, so here's my take on Mencía. 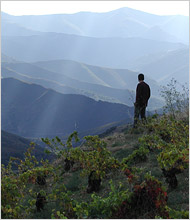 Mencía, like our friend Godello, finds it home in northwestern Spain.  This area of Spain is much different, climatically, from the rest of the country, as it tends to be a little cooler and receives much more rain.  The main region for Mencía is Bierzo, which is just north of Valdeorras.  The rainfall isn't quite as heavy and the temperature is generally warmer in Bierzo than in some areas of northwest Spain.  The region is hilly, as you can see in the picture at right, and the vines tend to be planted on very steep hillsides at altitudes as high as 2,300 feet.  For many years, Bierzo was a coal mining center for Spain but most of those mines were shut down in the 1980's.  Facing a serious economic crisis, the region transformed itself into a tourist center and invested more heavily in developing agriculture, especially viticulture.  It has only started to emerge on the worldwide quality wine scene in the last 20-30 years, but it has come on strong and fast.

For many years Mencía was thought to be either identical or closely related to Cabernet Franc.  Noted Spanish wine expert Julian Jeffs, as recently as 1999, commented that Mencía was "generally equated with Cabernet Franc."  Recent DNA evidence has shown that the two grapes are not related, though, they do share some similarities in their aroma and flavor profiles.  DNA testing has revealed that Mencía is identical to a Portuguese grape called Jaen and winemakers in Spain and Portugal are permitted to use either name on their bottles.  The grape is grown fairly widely in northwestern Spain, though the primary wine markets in the this part of the country are for white wines.  In addition to Bierzo, one of the wines I sampled was from Monterrei (southwest of Bierzo), an area which Doug Frost in his 2008 Wines from Spain: Far From Ordinary Wine Guide, refers to as a DO with "little more to offer than promise at the moment" and which "[isn't] a factor in the marketplace at the moment."  As a testament to this grape and this region's sudden rise, wines from some of these other northwestern regions are starting to show up in greater numbers, only three years after that was written.

The first wine I that I tried was the 2008 Luna Beberide from Bierzo.  I picked this up at vinodivino in Brookline for about $17.  The wine was fermented in stainless steel vats and is unfiltered.  In the glass it was a deep ruby color with a light violet rim.  The had a bit of a stewed smell, almost like stewed tomatoes, and a little bit of an earthy graphite note.  There wasn't much going on with the nose here.  In the mouth, though, the wine was fully bodied with medium acid and soft tannins.  There were spicy cherry and and fleshy black plum flavors with some blackberry and a smoky kind of minerality to it.  The wine itself wasn't sweet, but it had that sensation that I associate with the descriptor "sweet tannins" that always throws me a little bit.  Everything else here was nicely balanced, but that sensation kept me from really getting excited about this.  I was a little concerned as well because most of the descriptions that I had read about Mencía caused me to expect a lighter colored wine with more red berry fruits in it.  For many years, apparently, this was the style produced in Bierzo because growers were not utilizing the excellent slopes in the region for vines and were planting them on the fertile alluvial plains in the region.  This lead to overproduction and thin juice.  Bierzo was evolving so rapidly that many books were really behind the times when it came to the current state of affairs in this region.  I held off on writing about Mencía until I could get another bottle to see how atypical my experience really was. 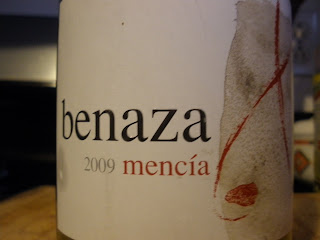 The second bottle that I picked up was the 2009 Benaza Mencía from Monterrei.  I grabbed this for about $13 from Curtis Liquors in Weymouth.  This wine was also a nice purple ruby in the glass.  The nose had waxy cherry and stewed strawberry fruit with a raspy kind of dried herb edge to it.  In the mouth, the wine was medium bodied with medium acidity and little tannin.  The palate followed the nose pretty closely with red cherry and stewed strawberry fruits with some raspberry.  It was mostly a nice, juicy red-fruit driven wine with a touch of smoke on the finish.  It's not the kind of thing that's going to blow you away, but it was a very nice, friendly little red wine.  It was pretty similar to Loire Valley Cabernet Franc in its flavor profile and structure, which is just fine by me.  This experience was much closer to what I was expecting from Mencía, though it still showed more character and extraction than many of the books I had read led me to believe was possible from this grape.  The bottom line is that northwest Spain is making some very good red wines from the Mencía grape and the price is right for these bottles right now.
Posted by Unknown at 2:16 PM