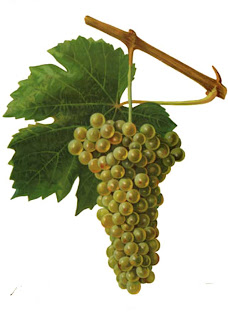 A few months ago, in my post on Romorantin, I told the story of a landmark paper that was published in 1999 which showed that many of the grapes currently cultivated in France all shared the same parentage.  One of the parents was Pinot but the surprising finding was that the other parent was a little known and poorly regarded grape known as Gouais Blanc.  Subsequent research (briefly outlined in my post on Menu Pineau) has shown that Gouais Blanc is likely one of the progenitors of nearly 80 different grapes that we know about today, making it easily the most prolific parent that we know of in today's world of grapes.  I bring this up because today's grape, Sacy/Tressallier, is one of those Pinot x Gouais Blanc offspring, making it a full sibling of Chardonnay, Aligoté, Auxerrois, Melon/Muscadet, Gamay and Romorantin.

Because many of the grapes from the Pinot x Gouais Blanc crossing are so well known, there has been a bit of additional research done on the pair and their offspring.  Most notably, in 2009 a group discovered which grape was the father and which was the mother for all of the grapes known to be the offspring of Pinot and Gouais Blanc.  For most species of animals and plants, it is relatively obvious which of the progenitors is the father and which is the mother.  Most animals have clearly differentiated sexes and it is usually easy to tell which animal actually gives birth, making it very easy to spot the mother.  It can be a bit more difficult in plants since many plants are hermaphrodites, but typically, whichever plant produces the seed or the fruit is the mother while the plant that merely provided the pollen is the father.  This works for sexually propagated crops, but vines are clonally propagated and the actual cross that created a given vine likely happened hundreds of years ago in the wild.  Knowing which vine is the father and which is the mother is a much dicier proposition, but it can be done.

Knowing that an offspring receives 50% of its DNA from each of its parents, it may seem impossible to figure out which 50% is paternal and which 50% is maternal.  Furthermore, it may seem irrelevant, since grapevines are hermaphrodites and don't have sex chromosomes, the matter of maternity and paternity seems like a merely academic exercise at best.  This is not entirely true, though.  The DNA of some of the organelles in plant cells, like mitochondria and chloroplasts, are inherited 100% from the mother, which means that the processes that regulate the vine's metabolism are maternally inherited with no input from the father.  In short, this means that the offspring inherits more than 50% of its DNA from its mother, and so for some things, it absolutely matters which vine was the father and which was the mother.  By examining chloroplast DNA (which is maternally inherited), the study mentioned above was able to determine that Pinot was the father and Gouais Blanc was the mother for 9 of the 12 offspring, including Chardonnay, Aligoté, Romorantin, Gamay Noir, Melon and Tressallier (the 3 with Pinot as the mother are the relatively unknown Aubin Vert, Knipperlé and Roublot).

It was long thought that Tressallier actually came into France via Italy, but the discovery of its parentage makes that story very unlikely.  It is now thought that the vine was born somewhere in Burgundy or in northern France.  Its name "Sacy" comes from a village in Champagne, while the Tressallier name is thought to be a contraction of "trans Alligerim," which means "beyond Allier," because it was once planted on the Allier River.  Like its sibling Gamay, Tressallier was once banned, though this time by the mayor of Vermenton (rather than Philip the Bold), who, in 1782, decried it for producing "dull, poor-quality wine."  Though widespread several hundred years ago, its plantings have fallen precipitously lately to only around 12 hectares as of 2008, down from 655 in 1958.  It is authorized for use in the Saint-Pourçain region, which is right in the middle of France, where it is permitted to make up only 20-40% of the blend and is typically blended with Chardonnay or Sauvignon Blanc.  It is also permitted in the production of Cremant de Bourgogne, though it isn't widely used there. 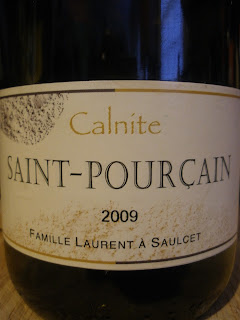 The first wine that I was able to try was the 2009 Calnite Blanc from Famille Laurent a Saulcet, which is about 70% Chardonnay, 25% Tressallier and 5% Sauvignon Blanc.  This bottle was provided to me as a sample from the fine folks at Oz Wine Company.  In the glass the wine was a medium lemon gold color.  The nose was fairly intense with aromas of lemon, golden apples, white flowers, cantaloupe and bread dough.  On the palate, the wine was medium bodied with fairly high acidity.  There were flavors of white pear, golden apple, green melon and a touch of lemony citrus leading to a clean, stony mineral finish.  There was a lot of mouth-watering acidity, but the flavor profile was pretty broad, lacking that zip and zing that I like in my white wines.  This bottle is mostly Chardonnay, and it definitely tastes like it, but it is still a very nice wine.  I'm not sure what this typically retails for, but I think it's in the $20 - $30 range, and it's definitely worth that.  Given the low percentage of Tressallier in the blend, it's not a great way to to get a real sense for the grape, though. 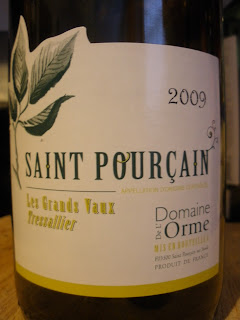 For that, I picked up the 2009 Domaine de l'Orme "Les Grands Vaux" Tressallier.  I picked up this vintage from my friends at Curtis Liquors for about $15, though I've seen the newer vintage (2011) at the Wine Bottega as well.  In the glass, the wine was a medium lemon gold color.  The nose was reserved with some pear and a bit of lime peel, but little else.  On the palate, the wine was on the lighter side of medium with fairly high acidity.  There were delicate flavors of lemon-lime citrus and white peach along with a clean, stony minerality on the finish.  It wasn't terrifically complex, but the flavors were clean and very pure with a wonderfully fresh vibrancy.  It had more of the zip and zing to it that I like, but it was also very well balanced.  I don't have any idea what the grape breakdown is with this wine, because typically when a variety is stated on the label, it must be made from at least 85% of that grape, but it also has Saint-Pourçain on the label, and I thought that the Saint-Pourçain AOC only allowed up to 40% Tressallier.  I've been told that this wine is 100% Tressallier, so that's what I'm assuming, but I can't really find any verification of that online.  In any case, it's a very nice wine, especially for the price, and is the sort of thing you should definitely pick up if you ever run across it.  Tressallier is increasingly difficult to find, but it is capable of making very nice wines.
Posted by Unknown at 4:34 PM