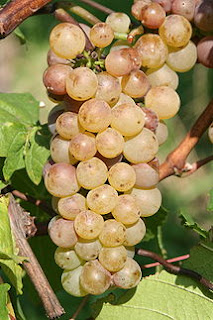 Auxerrois is a grape that frequently travels in disguise.  It covers nearly 5,000 acres of land in Alsace, more than Pinot Gris or Pinot Blanc, but you virtually never see its name on the label of a Alsatian wine.  Quite a bit of it finds its way into wines labeled "Edelzwicker", which is a generic term for any blended wine in Alsace.  Another portion of it ends up in the sparkling wines of Alsace which are simply labeled Cremant d'Alsace.  The most common wines that Auxerrois grapes end up in, though, are actually varietally labeled wines, but they are labeled as Pinot Blanc.  Exactly why has always eluded me but the fact of the matter is if you buy a wine from Alsace that is labeled as Pinot Blanc, there's a better than average chance that there's some Auxerrois juice in there somewhere.  That wouldn't be all that surprising as most regions allow some percentage of varietally labeled wines to be made up of other grapes, but it is possible that an Alsatian Pinot Blanc can actually be made up mostly of Auxerrois juice, or possibly even be 100% Auxerrois.  How can this be?

As mentioned above, I'm not exactly sure about the answer, but have found two explanations that are pretty similar.  According to Wikipedia, the words Pinot Blanc on a label in Alsace don't refer to a grape variety but rather to a white wine that is made from any of the Pinot varieties, which, according to the authorities, are Pinot Blanc, Pinot Gris, Pinot Noir and Pinot Auxerrois, which is the same as Auxerrois blanc.  The other theory I've seen in a few places (like the Wall Street Journal and whatever this is) simply states that the law says that wines labeled as Pinot Blanc can be made from either Pinot Blanc or Auxerrois with each grape allowed to comprise any part of the blend, from 0% to 100%.  The Alsatian winemaker in this video indicates that the latter explanation is essentially right, though his reading of the law is that if a wine has at least 1% Pinot Blanc and the rest is Auxerrois, it is labeled as Pinot Blanc.  I'm having a rather difficult time navigating the INAO website in order to find the relevant bit of legislation, so I'm afraid I can't really weigh in on the matter, though I do find myself leaning towards the latter explanation since it seems to have the most support online across sources and since I've not heard of Pinot Gris or Pinot Noir ever being used in Pinot Blanc labeled wines.

Whatever the case may be, it seems like it might be important to suss out the exact relationship between Auxerrois and Pinot Blanc as most explanations seem to hinge on it to some extent.  Some sources indicate that Auxerrois is a clone/mutation of Pinot Noir, which, if true, would make it virtually identical to Pinot Blanc, as both would be simply white-berried mutations of the same parent plant.  It also would explain the source for the name Pinot Auxerrois and would lend some credence to Wikipedia's assertion that the INAO regards it as a member of the Pinot family.  Other sources indicate that Auxerrois is a sibling of Pinot Blanc, which would mean that the two grapes shared the same parentage and, further, that Auxerrois is a sibling to Pinot Noir as well.  This explanation would seem to lend more credence to the second explanation above as it would mean that Auxerrois wasn't a member of the Pinot family (in the genetic sense, where members of a grape "family" are all clones from a single parent vine and not in the more common sense where members of a family are parents, siblings, cousins, etc.) but was related in some way that could explain its being lumped together with Pinot Blanc.

Though both of those explanations have some degree of explanatory power in trying to understand the INAO laws, both of them are wrong.  In 1999, a team at UC Davis found that the grapes Pinot Noir (or one of the Pinots, in any case) and Gouais Blanc were the parents of a slew of French grapes such as Aligoté, Gamay and Chardonnay, among others (Bowers, J., Boursiquot, J., This, P., Chu, K., Johansson, H., & Meredith, C. (1999). Historical Genetics: The Parentage of Chardonnay, Gamay, and Other Wine Grapes of Northeastern France. Science, 285(5433), 1562).  One of those offspring was none other than Auxerrois, which means that Auxerrois is related to Pinot Blanc, but as an offspring rather than as a clonal variant or a sibling (remember that Pinot Blanc is simply a mutation of Pinot Noir and that they are genetically indistinguishable using modern DNA analyses, so for pedigree reconstruction and family relation purposes, they're the same grape).  This also means that Auxerrois is a full sibling of Chardonnay, Gamay Noir, Aligoté, Romorantin and Melon (more commonly known as Muscadet), among others.

As mentioned above, Auxerrois is most widely grown in the Alsace region of France, but it is planted in limited quantities in Germany and is especially prized in the tiny country of Luxembourg, which is located just west of Germany and just south of Belgium.  The entire country of Luxembourg is fewer than 1000 square miles and has a population of about half a million.  The entire country has about 3200 acres planted to the vine, which is less than the total amount of Auxerrois grown in Alsace.  Luxembourg is pretty far north so ripening is an issue here, but since Auxerrois is pretty naturally low in acid, slightly under-ripe versions are palatable and, some might argue, more interesting than wines made from fully ripened grapes.  The Mosel River forms part of the country's border with Germany to the southeast and this is where much of the vineyard land is concentrated. 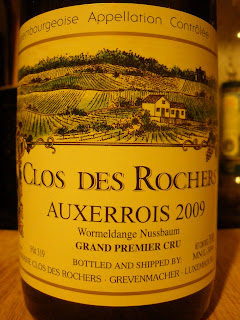 As you might imagine, Luxembourg doesn't produce a ton of wine, but I was able to find a bottle of the 2009 Clos des Rochers Auxerrois from the Wormeldange Nussbaum site in Luxembourg.  The Cru system in Luxembourg appears to not be linked to geography (geographically all Luxembourg wines fall into the Moselle Luxembourgeoise appellation) but rather to the evaluations of a tasting panel who score the wines on a 20 point scale. This wine was labeled as Grand Premier Cru, which is the highest level, and which means that the wine was submitted for tasting at least three times, with one of those tastings happening prior to bottling.  The wine is then tasted again after bottling and if it is scored higher than 16, it can be re-submitted for a third tasting.  If it scores above an 18 at the third tasting, then and only then can it be labeled Grand Premier Cru (it's an odd system you can read more about here).  I picked this bottle up for about $15 from my friends at Bin Ends.  In the glass this wine was a pale silvery lemon color with greenish tints.  The nose was moderately intense with white peach, lemon peel, honey and honeysuckle aromas.  In the glass the wine was medium bodied with fairly high acidity.  It was off-dry with flavors of ripe peaches, pineapple, orange cream, ripe pear and honey.  It was a big, ripe, round wine that was somewhat Riesling-like but which lacked the laser sharp acidity that is the hallmark of great Rieslings.  I enjoyed the wine quite a bit and found it to be a very good value at only $15. 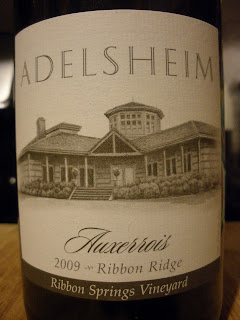 The next wine that I was able to try was the 2009 Adelsheim Ribbon Springs Vineyard Auxerrois from Oregon.  I picked this wine up locally for about $22.  In the glass this wine was a medium silvery lemon color.  The nose was moderately intense with delicate ripe pear and honey notes.  The aroma kind of reminded me of clean river water as well.  On the palate the wine was medium bodied with fairly high acidity.  There were racy flavors of green apple and lime with a touch of white pear.  The finish was clean and minerally, if a bit tart.  This wine walks the fine balance between tart citrus and plump white fruits very well and the clean, stony finish is refreshing and lovely.  It was much drier than the Luxembourg wine and also a bit leaner and more delicate as well.  It's a nice wine but not really worth the step up in price from the Luxembourg wine. 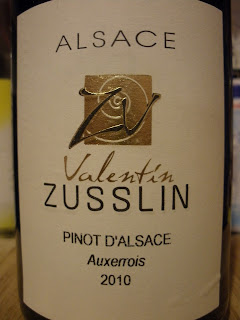 The last wine that I tried was the 2010 Valentin Zusslin "Pinot d'Alsace" Auxerrois from Alsace.  It can be difficult to find Alsatian Auxerrois that is labeled as such, so I was pretty excited when I found this bottle over at the Wine Bottega for about $25.  In the glass this wine was a medium lemon gold color.  On the nose the wine was fairly intense with aromas of peach, lemon curd, green tea, green apples and a touch of apple cider.  On the palate the wine was medium bodied with fairly high acidity.  There were racy flavors of ripe peach, green apple and apple cider.  The flavors were pure and very intense, but overall the wine was nicely balanced with good acidity and a nice, clean, minerally finish.  It had the intensity of the Luxembourg wine but was dry like the Oregon wine and really integrated the best qualities of both of those wines nicely.  It was the most expensive of the three wines, but I felt like it was really worth the money.

I've always enjoyed Pinot Blanc wines from Alsace (especially Zind-Humbrecht's bottling), but I've found that I generally don't like Pinot Blanc based wines from other areas.  Tasting through these three wines, I think that it's pretty clear that it's the presence of the Auxerrois grape that I'm really responding to.  Auxerrois has a reputation of making flabby, low-acid wines, but I found that the acid content in these three wines was nicely managed and the purity and intensity of the fruit really put the best examples over the top.  I'd definitely recommend picking one up if you come across it, especially with the warmer months of summer on the way.
Posted by Unknown at 6:35 PM