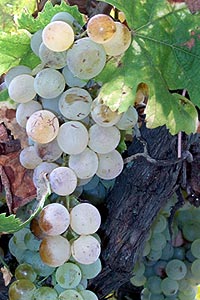 When I sat down to start researching the Bellone grape, I wasn't really expecting to find very much information.  I've only ever come across one wine made from it and had never heard of it prior to coming across that wine, so I assumed that it was pretty obscure and that there wouldn't be too much to say about it.  I was surprised to find that Bellone apparently isn't all that unusual in its home region of Lazio, where the Oxford Companion to Wine tells us there was about 7500 acres planted in the 1990's.  Once you get past that little factoid, though, the information available about Bellone gets hazy pretty quickly.

Let's start with Wikipedia, which claims that Bellone is primarily a red grape which also happens to have a white-skinned clonal mutation.  The OCW refers to Bellone as a white-skinned grape, as the does the VIVC.    Literally every other source that I checked indicated that Bellone is a white-skinned grape, but the source of the mistake is actually a misprint in the only source that Wikipedia references.  Jancis Robinson's Guide to Wine Grapes says Bellone is a "very juicy ancient grape grown near Rome," but the icon next to the entry indicates that Bellone is a red grape.  This has been corrected in the current edition of the Oxford Companion to Wine to read "very juicy ancient white grape..."  Wikipedia is occasionally wrong, and I know that people will tell you all the time that it's not a valid resource, but I don't necessarily think that's fair or true.  Most of the information in Wikipedia is correct and trustworthy, but as with any resource that you're using for research, you really need to check the citations and try to find supporting evidence from at least one other, non-affiliated source in order to verify that the information is correct.  In this particular case, the citation was from an outdated source and it just so happened that this particular entry in the original source was incorrect.  Always remember: it's not a fact if only one person says it.  Facts need to be corroborated across sources.

Next, let's consider the claim, presented in this article on the grape, that Bellone can be traced back to Ancient Rome, where it was called "uva fantastica" ("fantastic grape") by Pliny the Elder in his Naturalis Historia.  It seems like an interesting little bit of information, and it looks like this site might provide some corroboration, but I've seen this sort of thing before.  Pliny's book is perhaps our best source of knowledge about ancient Roman wines, but it is incredibly difficult to link grapes that he mentioned thousands of years ago to grapes being cultivated today (see also my post on Falanghina).  There are, fortunately enough, online texts of Pliny's Natural History available in both English and in the original Latin.  I decided to have a look to see what the context was for this assertion and to see whether linking Bellone to the "uva fantastico" was really warranted.  I was surprised to discover that the phrase "uva fantastica" doesn't even occur in Pliny's text.  In fact, the word "fantastica" doesn't occur anywhere in the text in any of its forms.  There is simply no evidence that Pliny ever referred to any grape as "uva fantastica," much less Bellone (which doesn't appear in the Natural History either).

I'm not saying that everything that I've published on this blog has been meticulously fact-checked and thoroughly cited.  I've done my best with the time and the materials that I've had, but mistakes get through.  I'm not necessarily taking the writers of the Wikipedia and Alta Cucina articles to task, but am rather calling for readers to be careful about the kinds of information that you're willing to admit into your knowledge bank as facts.  Information is more freely available now than at any other time in history, and the volume of that information increases every day.  I don't know how much of it is true, but I know that at least some of it isn't which is enough to make me feel the need to verify what I read and hear in my own way before believing any of it.  As Sir Arthur Conan Doyle said so well, "healthy scepticism is the basis of all accurate observation."

All of which brings us back around to the Bellone grape.  Bellone is grown almost exclusively in the Lazio region of Italy, near the city of Rome.  It is known for being both hardy and prolific, meaning that it is resistant to wide variety of diseases and yields fairly generously.  It is permitted in a handful of DOC areas, but is most often used as a blending grape, rather than as the star of the show, and even the locals refer to its taste as "simple." 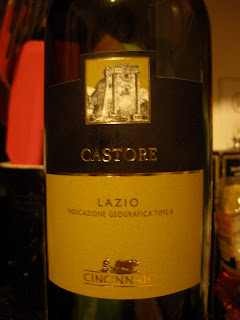 The wine that I was able to try was the 2009 Cantina Cincinnato "Castore" bottling, which retails for around $10 (from my friends at Curtis Liquors).  This wine is 100% Bellone.  The name "Castore" comes from Castor and Pollux, the "Gemini" twins born from Leda after she was raped by Zeus in the guise of a swan.  It is the companion bottling to the Nero Buono based "Pollùce" we took a look at a few months back.  In the glass this wine was a fairly light silvery lemon color.  The nose was delicate and mild with pear, ripe apple and just a hint of lemon.  On the palate the wine was on the fuller side of medium with fairly high acidity.  There were flavors of green apple and pear with a very bitter lemon peel kind of flavor.  This does eventually blow off a bit, but there is a bitter undercurrent to the wine that never really goes away.  It's not a particularly complex wine, as the pear aromas and flavors really dominate throughout, but it's still pretty tasty and is a nice bargain at around $10 a bottle.
Posted by Unknown at 3:52 PM

We have a Brut Metodo Classico from Marco Carpinetti on our wine list, made exclusively from the Bellone grape. In this form it's quite rich but with an applaudable acidity and a very food friendly palate.

I've tried a few still wines with Bellone in the blend as well but never anything with an elevated form of complexity.