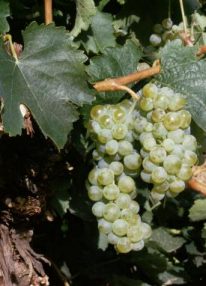 Over the weekend I received an email from the American Journal of Enology and Viticulture (which I subscribe to) letting me know that they had just put up a few new ePress articles (which, I think, are in-press articles slated for an upcoming print run of the journal, but which haven't been officially published yet).  As I was scanning through the articles, one entitled "Genetic origin of the grapevine Tempranillo" caught my eye (citation 1 below).  The parentages of a lot of really important wine grape have been discovered in the past 10-15 years, but this was the first paper that I could remember seeing regarding Tempranillo, whose full parentage has remained essentially a mystery until now.  A Spanish research team did discover a parent-offspring relationship between Tempranillo and Albillo Mayor in 2010 (citation 2 below), but this most recent paper confirms that Tempranillo is the offspring of Albillo Mayor and Benedicto.

It just so happened that I had a tasting note that was awaiting the Fringe Wine treatment from a wine featuring the Albillo grape, so I started to do a little bit more research.  Friends, Albillo is a difficult grape to get a handle on.  The name Albillo first pops up in the literature in a 15th Century agricultural work by Alonso de Herrera, and it looks like since then, the name has been given to many different grapes which had some physical characteristics in common (small, white aromatic berries that ripen early), but which weren't necessarily related to one another.  By the 19th Century, some authorities were attempting to reduce the confusion by appending place names to some Albillo cultivars to indicate their geographical origin and to differentiate them from other Albillo varieties.  This didn't really work, and so the confusion persists to some extent today.

There are several grapes that have Albillo as a part of their name or as an accepted synonym, but officially there is no grape known simply as Albillo.  Kind of.  As far as I can tell, the Spanish government actually lumps all the various Albillo grapes together under the single name "Albillo," so planting statistics actually reflect the totals of all Albillo grapes.  All grapes called Albillo are not the same, though, as the VIVC recognizes at least five genetically distinct Albillo grapes (though there are possibly more than that).  Albillo Real seems to be the most common form of Albillo, as most of the VIVC's synonyms refer back to this grape.  Wikipedia insists that only Albillo Real is ever referred to simply as Albillo, though there is no source given for that bit of information.  My guess is that the author of the Wikipedia post is saying this because only Albillo Real has just "Albillo" as an accepted synonym, which may be true, but isn't sufficient to make that particular claim.  Chasselas actually has "Albillo" as a synonym as well, though Chasselas and Albillo Real are not the same grape.

Albillo Mayor seems to be much less common as the paper proclaiming its parental link to Tempranillo indicates that it covers 773 hectares of land in Castilla Y León, which accounts for only .08% of the total vineyard area of Spain.  I'm not sure where that statistic comes from since, as noted above, I'm not aware of any statistics that track the various individual Albillo varieties and this particular bit of information is not given a citation in the article text.  The other Albillos (Albillo Krimskii, Albillo de Albacete and Albillo Real de Granada) appear to be much less important, as there is virtually no information about them online.  Another paper in the email from the American Journal of Enology and Viticulture (citation 3 below) identifies another Albillo cultivar known as Albillo Dorado, about which there is likewise not much information other than that it is definitely genetically distinct from Albillo Real and should be considered as a separate cultivar.

Albillo Real and Albillo Mayor are likewise genetically distinct varieties (citation 2 below), but if your bottle of wine only indicates "Albillo," how are you to know which one you have?  The only real clue that  I can find has to do with geography.  Many sources (the Oxford Companion to Wine, citation 1 and citation 3 below among them) indicate that Albillo Mayor is more widely cultivated in the Castilla Y León region of Spain while Albillo Real is cultivated in the Castilla-La Mancha region just south of Castilla Y León.  The wine that I picked up was labeled as Castilla Y León and the winery is the in the Ribera del Duero, which is given special mention in the OCW for their plantings of Albillo Mayor.  On the other hand, Wikipedia indicates that Albillo Real is planted primarily in the Ribera del Duero as well, though I suspect that the Wikipedia page isn't to be trusted on this matter.  I mentioned above that the official planting statistics lump all of the Albillo's together in a single category called "Albillo," and since the author of the Wikipedia page believes that any reference to just "Albillo" must refer to Albillo Real, you can see how there might be cause for misunderstanding.

All that said, I'm still not 100% sure which Albillo I might have tried.  The odds seem to suggest that Albillo Real is the most likely candidate, but the winery's location might indicate otherwise.  I'd certainly like to believe that this is Albillo Mayor because of the new-found link to Tempranillo, but I just don't feel like the evidence is substantial enough to say with any certainty.  In the meantime I guess all I can do is just claim that this wine is from Albillo and leave it at that. 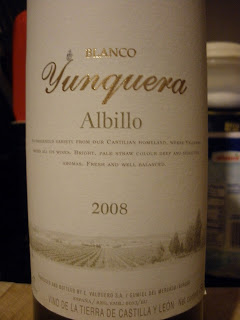 The wine that I was able to try was the 2008 Valduero "Yunquera" Albillo from the Castilla Y León region of Spain.  I picked this bottle up from my friends at Curtis Liquors for about $18.  In the glass this wine was a fairly light silvery lemon color.  The nose was intense and unusual with pear, banana, asparagus and mint aromas.  On the palate the wine was on the fuller side of medium with fairly high acidity.  There were flavors of tart, fresh lemons and green apples, white pear, cooked asparagus and something slightly leesy on the back end.  This wine was searingly tart with lemon really dominating the flavor profile.  The sour flavor made it difficult to drink on its own, but it would stand up to dishes like chicken piccata fairly well I think.  Overall, I thought it was very interesting, whatever the actual grape variety turns out to be, and it's definitely worth a look for fans of bright, citrusy, high acid white wines.