It's been a few months since we visited the vinous wonderland is that is Italy's Piedmont region, so today I'd like to head back into those Alpine hills to take a look at a grape called Erbaluce.

Erbaluce is one of those grapes that seem to have been around forever.  It is first mentioned in print in 1606 in a work by G.B. Croce under the name of Erbalus, though there are some who believe that the grape has been cultivated in northern Piemonte since before the Romans arrived.  The Erbalus spelling was used again in a work towards the end of the 18th Century, though that author (Count Nuvalone), mistakenly takes the "Erbalus" to be a synonym of the Arneis grape grown nearby.  Other authorities have tried to draw some connection between Erbaluce and Greco, with one 19th Century ampelograher referring to Erbaluce as Greco Bianco from Ghemme (a village in northeastern Piemonte), but a link between the two grapes is unlikely (despite the fact that one of the listed synonyms for Erbaluce is Greco Novarese).  Several of Erbaluce's listed synonyms also contain the word Trebbiano, though the grape isn't thought to be related to that family either.  Which leaves us practically nowhere in trying to guess at Erbaluce's origins.  Most sources state that the grape is native to northern Piemonte and leave it at that.  It would appear, given the lack of information, that we currently have no choice other than to do the same.

The grape is named for the copper color that the bunches take on as the sun hits them on the vine.  The selling point and the criticism of wines made from the grape is their high acidity.  High acid is a great thing for the sweet and sparkling wines made in the region, but opinions seem to be divided on whether it's such a good thing for the dry table wines.  Production is centered around the town of Caluso, which is about 30 km northeast of Torino.  Interestingly, given the grape's long history of cultivation in the area, it has not migrated at all and there are no significant plantings to speak of outside of this small area.  The village and the vineyards sit in a glacial basin at the foothills to the Alps, where a modest handful of producers dedicate themselves to the Erbaluce grape.  The Erbaluce di Caluso DOC requires 100% Erbaluce grapes, though the style can be dry, sparkling or sweet, with the sweet passito style wines held in the highest regard. 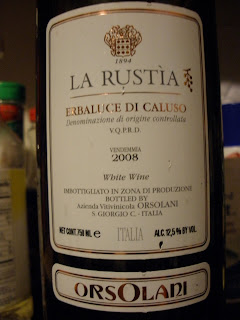 I was not, unfortunately, able to find a bottle of  passito Erbaluce, but was able to pick up a dry table wine and a fully sparkling spumante version.  The first bottle I tried was the "La Rustia"  offering from Orsolani.  I picked up the 2008 vintage from Central Bottle for about $21.  In the glass, the wine had a pale greenish lemon color.  The nose was moderately open and fairly straightforward  with green apple, pear, and lemon peel aromas.  On the palate, the wine was on the lighter side of medium with high acidity.  There were racy flavors of green apple, lemon-lime citrus and citrus peel.  The wine finished with a kind of grassy, herbaceous note on the back end.  The acidity was electrically high, but the wine had enough fruit coating that live wire to make it manageable.  I would recommend serving this with a pretty significant chill on it, as the acidity gets a little overwhelming as this approaches room temperature.  I love high acid white wines, so this was right up my alley. 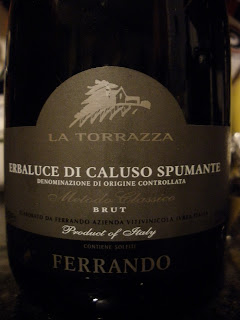 The second wine I was able to try was the 2006 "La Torraza" bottling from Ferrando.  I picked it up for about $40 from my friends at the Wine Bottega.  In the glass, the wine was a medium lemon gold color with vigorous, almost aggressive bubbles.  The bubbles were frothing so much that when I went to pick up my glass by the stem, the top of my hand got wet from the bubbles bursting and sending spray over the sides of the glass.  The nose was fairly reserved with just a bit of yeastiness, but it was mostly just a blank.  On the palate the wine was light bodied and bone dry with high acid and very intense bubbles. There was some lemon peel citrus, toast, and a clean minerality, but the overall impression was one of severity.  This wine was nearly all structure and little stuffing and my notes are littered with words like lean, sharp, angular and austere.  Which is not to say that I found it unenjoyable, it's just to say that the enjoyment that I got from it was not a purely hedonistic experience.  The wine was precise and focused and there's something to be said for that.  It's not the kind of thing I'd open on New Year's Eve, but it is the kind of thing that has all the characteristics of a nice aperitif and, further, lends itself well to a wide variety of food pairings.
Posted by Unknown at 12:31 PM