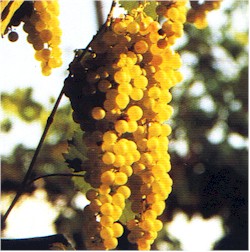 Though the history of viniculture and viticulture goes back several thousand years, the histories of individual grapes tend to be measure on the scale of hundreds of years at the most.  There are several good reasons for this.  The most important reason is that the craze for varietal wines and the consumer and winemaker focus on individual grape varieties is a very recent phenomenon.  Wines were traditionally given names related to their geography, and the grapes that went into making those wines was of secondary importance at best.  The linking of individual grape varieties with particular places didn't become a legal issue until the last hundred or so years when the various appellation laws began to take effect throughout Europe.  While individual grape varieties may have been associated with famous wine growing regions in the distant past, there was nothing (or very little) forcing any of those growers to continue to grow those grapes in those regions other than tradition.

Another, more obvious reason for the lack of long historical records for individual grapes is that grape names have tended not to be very stable throughout history.  The lands of Europe have changed hands many times over the past few thousand years and each new wave of conquerors brought their own languages and their own attitudes towards wine making and wine drinking.  The mix of materials, languages and cultures made it difficult for a stable vocabulary to develop so even if a particular grape variety has been in continuous cultivation for a thousand years, it would be easy to lose track of it through the historical record as that record shifted from conqueror to conqueror and from language to language.  Throw in the lack of a consistent and thorough historical record for all wine making regions throughout history and the lack of a unified ampelography, and you end up running into a lot of trouble when you try to trace an individual grape very far back through the written histories.

Some grapes do have long historical roots, though, and Albana is one of them.  The first written record of a grape known as Albana comes to us from a work written in 1305 AD.  Pietro de Crescenzi, a Medieval agricultural writer, writes of Albana that it makes "a powerful wine with an excellent taste."  You can find some variation on this theme in just about any source you pick up that mentions the grape, though I've often wondered how anyone can be sure that the grape called Albana 700 years ago is the same as the grape currently known by that name.  This becomes an even more troubling question when you take a look at the two etymological reasons given for the grape's name.  The most common reason given is that the grape's name comes from the Latin word alba, meaning "white," and it was given its name because of its exemplary stature in comparison with other white grapes.  The second explanation for the grape's name is that it was originally cultivated around the Alban Hills of Lazio and was named for them*.  Both explanations seem to allow for the possibility of a lot of confusion with similarly named grapes, and I would be very surprised if it turned out that Crescenzi's Albana and ours were the same grape.  Since there's probably no way to say for sure, though, we should probably just note our skepticism and move along.

What we can say for sure about Albana is that it is an important piece of the Garganega family tree.  Garganega is the great white grape of Soave, and recent studies have shown that it has a parent/offspring relationship with a staggering number and variety of grapes throughout Italy.  One of those grapes is Albana, though Garganega also has a parent/offspring relationship with Catarratto, Trebbiano Toscana and Malvasia di Candia, among others.  What is really shocking about these findings is the geographical dispersion of these grapes, as they can be found from the Veneto in the northeast to Emilia Romagna in the center-west, all the way down to the island of Sicily in the south.  It isn't clear whether Garganega is the parent to all of the varieties listed or whether one of them is one of its parents, which means that Albana is either a grandparent to the others (if it happens to be a parent to Garganega), or is a half-sibling to them and possibly a grandchild of one.

As you might expect from a grape purported to be as old as Albana, there are many different clonal variants of the grape currently cultivated.  The most common one is known as Albana Gentile di Bertinoro, but Wine Grapes lists at least five other clonal varieties as well.  They also hint that some of these could actually be seedlings of Albana and thus not technically clones but rather separate varieties, but no evidence, DNA or otherwise, is provided to back this up.  Albana's curious claim to fame is that it was actually the first wine promoted to DOCG status in Italy in 1986 with the establishment of the Albana di Romagna DOCG (a decision which is universally considered to have been politically rather than qualitatively made).  There are currently nearly 7,000 acres of Albana under vine in Italy as of 2000, which is down from around 11,000 as of 1990.  Albana wines run the gamut stylistically from light table wines to sparkling wines to sweet passito style wines. 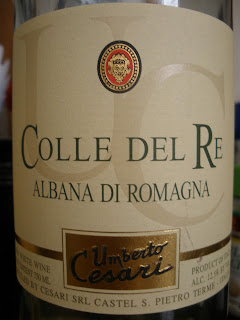 I was able to try two different Albana-based wines, one in the dry table wine style and another in the passito style.  The first was the table wine, which was the 2009 Umberto Cesari "Colle del Re" Albana di Romagna, which I picked up on a recent trip to Pennsylvania in one of their state stores for around $15.  In the glass the wine was a medium silvery lemon color with greenish tints.  The nose was moderately intense with green apple, lime and grapefruit citrus aromas, along with just a hint of leesy funk.  On the palate the wine was medium bodied with medium acidity.  There were flavors of white peach, green apple, lime and juicy ripe pear along with a hint of beeswax and lees.  The flavor profile was broad and generous, with a little bit of citrus to rope it in.  I would have appreciated a bit more acid to it, as without it I thought the wine was a little bit bland.  The blurb description of the grape in Wine Grapes calls it an "inherently neutral Italian variety" which I thought was a pretty accurate description, but then it goes on to say that it " can produce very good sweet wines," so I decided to pull the cork on my passito wine to see how it fared. 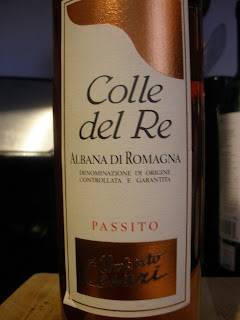 The second wine that I tried was the 2003 Umberto Cesari "Colle del Re" Albana di Romagna Passito, which I picked up from my friends at Marty's for around $40 for a 500 mL bottle.  In the glass the wine was a reddish tawny-amber color.  The nose was fairly reserved with some date, raisin, burnt sugar and toasted nut aromas.  On the palate the wine was on the fuller side of medium with fairly high acidity.  It was very sweet with flavors of dried cherry, raisin, date, scorched brown sugar, walnut and maple syrup.  I was surprised at how bright and zippy the wine was given the lackluster acidity in the table wine I tried, but the acid was bright and vibrant here and really made the wine dance on the palate.  It was sweet, nutty and very tasty, but the price tag did feel a little steep.  It was definitely a more interesting and complex wine than its table wine compatriot, and if these two bottles are representative, then I would agree with the assertion in Wine Grapes that the sweet wines made from this grape are really the place to go for the best Albana experience.

*There is apparently yet another possible explanation, given by this site, which says that the grape name comes from its resemblance to the straw colored hair of a Roman empress named Albana.  I've not seen this explanation elsewhere and though I like it more than the other explanations, I feel that it's probably the least likely.
Posted by Unknown at 3:26 PM