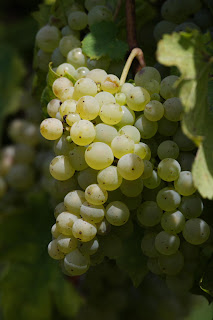 Located east of Beaujolais, just on the border between France and Switzerland sits Savoy, a small Alpine region that makes up for its relatively tiny size by having a very complex constellation of grapes and labeling conventions. I've been reading a few different sources, and I'm not sure that I can accurately represent the complexity of this wine region here. From what I can gather, there are four separate AOC designations and within those AOC designations, there are also cru designations. From what I can gather, the layout here is similar to Beaujolais, where there is the general AOC Beaujolais designation that covers a large area, but within Beaujolais, there are villages that are entitled to list the name of the village in addition to the Beaujolais designation. So a wine produced in the village of Morgon, for example, is allowed to put the name of the village on the bottle as well as the blanket designation of Beaujolais. For our purposes here, the bottle in question is from the cru village of Abymes in the Vin de Savoie AOC. 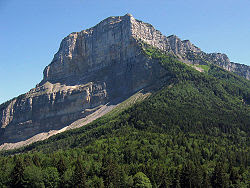 that are responsible for the largest volume of production. They got their names in a pretty gruesome way. In November of 1248, there were torrential downpours in the region and a section of Mont Granier, estimated to be about 500 cubic meters of rubble, crashed down on the village of St. André and several other nearby villages, burying between 1,000 and 5,000 people (depending on the source). For centuries, this land was left untouched but was eventually planted over to vineyards. Apremont loosely translates as "bitter mountain" and Abymes as "ruin" or "abyss." In the image to the right, you can see the sheer cliff face of Mont Granier which was left after the landslide.

Wines from Savoy are allowed to use the name of the grape varietal on the label, which is a little unusual for French wine. The whites are typically made from Roussette (also known as Altesse), Roussane, Gringet, Pinot Gris and/or Jacquère . As a general rule, if the bottle doesn't indicate which varietal was used, it's probably Jacquère. Apremont and Abymes are both made exclusively from Jacquère, which is high yielding and grown almost exclusively in Savoy. There are about 1,000 hectares (2,500 acres) planted to Jacquère in the Savoy region. It can be difficult to find any Savoy wine in the United States since local production tends to be very small while local consumption is very high. It may be that as much as 80% of the production is consumed locally by thirsty alpine skiers and regional inhabitants, leaving very little for export.

I was fortunate enough t

o track down a bottle of Vin de Savoie Abymes at a local shop for around $14. It's difficult to tell who the producer of the bottle was due to the proliferation of names on the label. It was either Domaine Labbé à Les Marches or Gaec du Pont Royal Vignerons. In any case, the vintage was 2009 and a picture of the label is on the left there. The wine had a very pale straw color and a rich nose of pear and green apple with a clean minerally smell. On the palate, the wine was light bodied with high acidity that was kind of tingly and effervescent feeling, though there weren't any bubbles present. There were pear, green apple and bitter almond flavors along with a bit of herbaceousness. It was wonderfully light and refreshing with a crisp, clean minerality to it. This is very reminiscent of a good Muscadet, but it had a bit more complexity of fruit on the palate and it lacked the leesy yeastiness that Muscadet can have. The food pairings, I would think, would be pretty much the same as for Muscadet: raw shellfish or light shrimp/scallop dishes or just as an aperitif. This is a classic summer sipper that really helped me to forget the three feet of snow that is currently sitting out in my yard.
Posted by Unknown at 12:25 PM

if you can get it, buy it and drink it...Abymes is lovely and so nice that despite drinking the one bottle souvenier over 30 years ago..I seek it out at all wineshops in the UK...no luck yet!

Just purchased (and am currently drinking) a bottle from the same producers in question, vintage 2011. I agree with the muscadet compairison. Also Alsaisan Pinot Blanc comes to mind. Allot of citrus push in this bottle as well as a slight effervesance and allot of minerality. Bought because I couldn't find the price I was looking for on something else. Happy but debating if it's unique enough to put BTG on a wine bar menu.

i love this stuff! i googled it to try to learn more and ran across your blog. i love this blog and will be reading more. i'm not too adept at describing wines, but this is one of my favorite whites of the past few years. i love the slight effervescence. not the exact one you posted, but this varietal. i think we get very different wine on the west coast? thanks for doing this blog :)